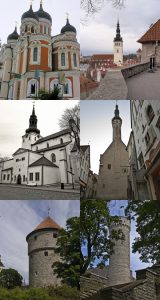 We will look with you medieval Tallinn, which for centuries was divided into the upper and Lower city, each of which lived according to its laws and regulations, everyone has something to show and what to tell.

The upper town is a knight’s castle and an Orthodox temple, the Dome Cathedral and the palaces of the owners of the Estonian land – the Baltic barons – the descendants of the Knights. The lower city-merchant, trade and Workshop. Town Hall square, Main Street and guild buildings on it, medieval houses, towers and Walls.

Miraculously preserved to this day, despite the wars, diseases and other authorities, the medieval city-one of the main values of Tallinn, is included in the list of World Heritage of UNESCO, as a living museum and a vivid example of the Merchant City of the Hanseatic League.

Tallinn Upper and Tallinn lower-it is here and pass the main and most popular routes of excursions in our capital and this part of Tallinn is eager to see tourists who have never been here. And this is undoubtedly the right Decision.

The cute and magical Old Town consists of the rocky hill of Toompea and the lower town between the hill and the Sea. Now it is a single territory, but until the end of the 19th century on this small square there were two separate cities-toompea (or Vyshgorod) and the lower town. The relationship between the know, evacuated in the upper town, and the merchants and artisans of the lower Hanseatic of the city have always been Complex. And the proof of that is the powerful walls and strong gates that represent the boundaries of these Territories.

So we ask for a sightseeing tour of old Tallinn. The best Tallinn guides are looking forward to seeing you.

* Optional: There is an opportunity to harmonize the duration and price of the excursion *