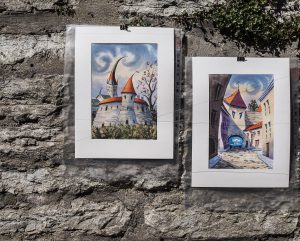 Long ago on the tower of the old Town Hall is the Guardian and talisman of Tallinn-the Iron Lord with a big Moustache-wang toomas. He knows everything that was before and going on in the city NOW. He told me his stories, and i’ll tell them to You.

.. On a walk we will see old houses and churches, learn how people lived in the middle ages, when there was no internet and even mobile phones. How difficult it was to become a master and why it was very important to Become. Have you ever noticed that there are towers and walls between the upper and lower Cities. These are the frontier towers. Why were they built inside the city? Here is how many questions you can get answers, walking around the old city…

In the middle of the 15th century, a wall was erected between the two cities, which was called the “wall of enmity” by the People. At night a powerful gate intra churches towers on Pikk jalg and ljuhike jalg tightly closed. Some of these gates have survived to the present day. And on the excursion we will see them and estimate the power of these borders…

Only in the late 19th century in Tallinn was elected the first city Duma and city uprava, the power of which extended to the upper and lower City. Officially the association occurred in 1889…

Very informative and quite serious excursion for children and teenagers interested in the history of Tallinn or wishing to increase their knowledge and horizons.