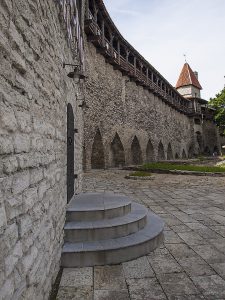 How in the old days defended the city, who duty on the towers and how many towers in tallinn? That’s What we’ll learn on our WALK.

The route starts from the town Hall Square to the Church of the Holy Spirit and the building of a large merchant guild. Visit the sights of the peak street, go to the mysterious street of spirits, walk along the widest street of the old town-lai, get acquainted with the Merchant’s house and go to the highest church of our city-the Church of Oleviste. Here I will tell you the history of its Construction.

Founded in Tallinn in the 13th century, the church at the turn of the 15-16 century was supposedly the tallest building in the world, its height reached 159 meters. And this height of her playing with the church is a wicked Joke. Eight times the church was struck by lightning, which three times led to fires, inflicting the strongest destruction, and for many years the church Niguliste stood without a tower and was repaired in the 19th century.

The first mention of this church, which is built by the Gothic style, dates back to the year 1267. Nowadays its height is almost 124 meters and this tower is considered one of the symbols of Tallinn.

The name Oleviste owes to the Norwegian king Olaf II Haraldson and with it is connected the most interesting Tallinn legend about the builder Olave.

Let’s see a number of houses called “three sisters”, the only horse mill in the city, the tower “fat margarita” and estimate the size of the largest surviving sea Gate.

Then we go along the longest part of the fortress wall, visit the square of the towers and near the church of Transfiguration. we’ll finish our excursion near the monastery Gate.

Presumably the fortress Wall defended the city already in the 13th century, then it was wooden, and in the 14th century the territory covered by the wall expands and for the construction began to apply STONE-LIMESTONE. The city has developed, therefore the territory surrounded by a fortress wall also constantly increased.

The process of forming the wall stretched from 14 to 16 Centuries. By the middle of the 16th century the city became one of the most fortified settlements in northern Europe. By this time the perimeter of the city wall was 2350 meters, the military power of the reinforcing tower, which was a total of 48. Up to now, 1850 meters of walls and 26 towers have Survived. The average height of the towers is 18-22 meters, and the height of the wall was 11 to 16 Meters. The walls were surrounded by a defensive moat, which was almost full of water, and contained 3 water mills with dams and 6 bridges.

If desired, we can increase the route and see other, not less beautiful and well preserved, parts of the fortress Wall.