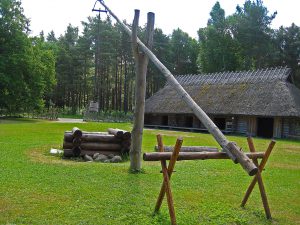 The Estonian open-air museum is called Rocca al mare, which translates from Italian as “the rock over the sea” so named its summer estate mayor Tallinn 19th century Girard de sukanton-in love with Italy Frenchman who lived in Estonia. Now in this territory you can get acquainted with the way of life of Estonian Peasants. Buildings and utensils were brought here from every corner of Estonia to show the culture and customs of the People.

Among all the museums of estonia-it is the most worthwhile and interesting museum. I strongly recommend you to find the time and get acquainted with the exhibits presented there. it’s all real, no props.

The open-air museum of Rocca al Mare (translates as a cliff by the Sea) was founded in 1957. Its area is 80 hectares. The museum is a complex of ancient unique buildings of different times and regions of ESTONIA.

The territory of the museum is divided into 4 parts. In each part the central place is given to peasant estates, grouped in Villages. Here you can see windmills, water mills, tavern, church, etc. d. The museum has already delivered 72 buildings, of which formed 12 estates consisting of residential and economic buildings and surrounded by their characteristic fences. The museum has collected more than 46 000 exhibits.

More of the Museum’s collection is built in the XVIII-XX Centuries. It is noteworthy that the interior decoration of the houses did not change, but preserved in its original form.
One of the most valuable exhibits of the museum is the Sutlepa chapel. this unique wooden structure was erected in the year 1699.

Folk festivals with singing and dancing are often arranged on the territory of the Museum. In Tavern cola, for example, It is possible to have a tasty dinner, the varied choice of dishes is offered.

Rocca al Mare is not only a cognitive excursion, but also a wonderful holiday in Nature.